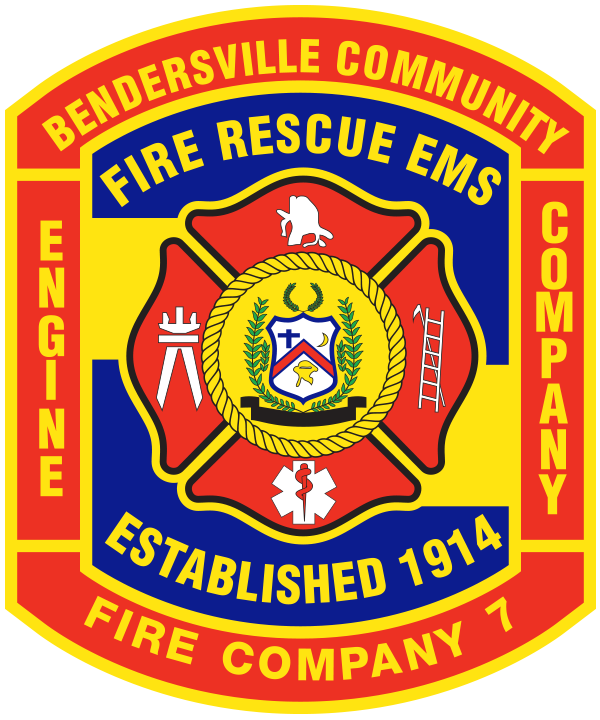 Shortly after the Fire Company re-organized in 1931, it became a community fire company. Women from Brysonia, Wenksville, Mt. Tabor, Peach Glen, Idaville, Gardeners, Flora Dale, Bendersville, and all areas in between gathered to organize an Auxiliary to support them financially and physically. So in 1932, they officially became the Ladies Auxiliary of the Bendersville Community Fire Company for the next 80 years. The Officers in 2012 were as follows: Co-presidents Marie Hess & Brenda Bobo, Secretary Ruth Bretzman and Treasurer Candy Bretzman. Due to the changing times and in the best interest of the Fire Company, the Auxiliary was disbanded on January 1, 2013. All current Auxiliary members were rolled into the Fire Company membership and continue to serve our organization.

Early fundraisers included selling homemade donuts for Shrove Tuesday. This ended when so many orders were received they could not handle the said orders with limited kitchen equipment. The main function was to prepare and serve food for the carnival. Carnivals were held at the old school and the ODD Fellows Hall. North located on North Main Street. After purchasing the Fruit Growers building, facilities were better and some banquets were served. Candy was also sold.

Around 1950, the stage was removed, and a larger kitchen was opened in 1952.This was much better. For a few years, additional functions were not held. The remodeled kitchen was paid off, and leadership hard to find. After purchasing the 54 Seagrave, things picked up and have increased, with a few lulls when expenses were low. As time went by and new fire-fighting equipment was purchased, the women were always there to help.

After the new kitchen and hall were built in 2003, the Auxiliary concentrated on banquets, weddings, funeral receptions and bingo. On average, they served around 3,000 meals a year and also helped with breakfasts, suppers, shrimp feeds and the big one, carnival.

While accomplishing all this, they also provided a canteen committee which took food and drinks to large fire calls, the longest of which was at the Peach Glen factory for over 12 hours, and the most difficult being the Big Flat Mountain fire, where they carried food along the fire line and were drenched with water from an airplane. Freezing temperatures have not stopped the Auxiliary from delivering hot drinks, soup, and sandwiches. They have also gone to other Fire Companies to assist with food preparation in times of need.

The greatest accomplishment of the Auxiliary was paying for the kitchen equipment in the new building, which was actually paid ahead of schedule and allowed them to also purchase a walk-in freezer. Other projects that the Auxiliary completed include: finished the cake room and the kitchen office space. The cake room was fitted with a sink, microwave, and cabinets, and the office with cabinets for storage and a place for volunteers to put their personal items while working. They also acquired coffee cars, which could be moved to different areas throughout the facility. The Auxiliary could always be counted on to give money to the fire company to help with the cost of maintaining the facilities.